Here’s a simple way to make feedback more effective: always give an example. Sounds easy so far. But what exactly do I mean?

Imagine your colleague asks what you think of their draft report. You like it. But you think the argument could be stronger. Here’s how your feedback might sound without an example:

💬
I think it’s a good report, nice work. But I wonder if you could make your argument a bit clearer? That would make it more persuasive.

This feedback is OK. But here’s what it looks like with an example:

💬
The draft’s looking great, nice one. I think you could improve it by tightening up the argument. I get that you think renewable energy is the way forward, but you don’t explain why. Maybe you could offer some evidence to back this up? Like industry reports about the risks and benefits.

Your example needs to be a possible solution to the problem you raise. In principle, they could use it to improve their Thing. (In practice, they probably won’t. We’ll get to that in a minute.)

Feedback isn’t all negative. It’s not just, “here’s what’s wrong with your Thing.” You may want to suggest that they add something. The idea here is the same. Offer an example of what they could add or how they could do it.

Now I’ve told you what I mean by offering an example, let’s talk about why it’s important.

People panic when we offer ways to improve

Many people panic when they get feedback. Even if they asked for your opinion, part of them wants you to say it’s perfect. Finished. No more work to do.

So when you tell them there’s a way to improve, their mind races. They imagine that they’ll have to throw everything away. Start from scratch. Maybe they’ll never finish. It’s an emotional rollercoaster.

Of course, this isn’t rational. But it happens to most of us. We find it hard to maintain perspective when someone tells us how to improve.

I learned this technique from the performing arts. In film and theatre they have the concept of a “note”. This means feedback. If you’ve ever been involved in a theatre production, you’ll remember Notes from the Director. The Director stands in front of the cast and tells them what to change to improve the play.

The story I heard was about animated films. Here, teams of people spend weeks creating a prototype of a film. When they hear a note, they might panic. And think that they’ve wasted all of that time. One studio created a rule. You can only give a note if you provide a fully worked-through example of a way to fix it.

If you think that a character or a story doesn’t work, you need to provide an alternative. A tweak. A slightly different story. Or a way to remove the problem character. The team who made the film doesn’t need to use your example. But the point is: they could. Your example shows that it’s possible to fix the problem.

Show that the problem is fixable

Effective feedback is actionable. People can do something with it. When you offer concrete examples, you demonstrate that you:

They don’t need to use your example

You may have noticed that you aren’t the best placed person to fix the problem. Perhaps your friend is an expert in their topic. And you’re just helping out.

This means that most of the time, they won’t use your examples. Which is fine. The reason you offer them isn’t because they’re the best way to solve the problem. They aren’t. They are a possible solution. That’s all your friend needs from you.

Ready to give this technique a go? Next time someone asks you for feedback:

People will thank you for it! Most feedback we get from colleagues isn’t useful. Here are five easy ways to fix that. Because studies show that we can’t learn without it. 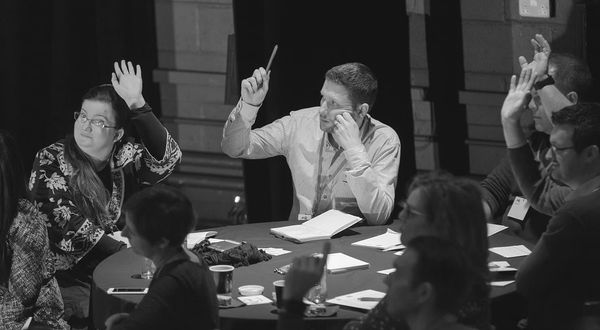 A tip that gets the audience involved in your talk. While making you seem calm and confident. Read all 7 benefits and try it! People don’t interrupt to steal the mic. They want to connect with what you’re saying. Learn to treat their actions as a gift.